Read the joint statement signed by 11 organisations welcoming the suspension of the adoption of the draft Additional Protocol to the Oviedo Convention. 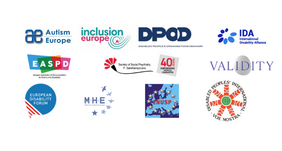 We, organisations of persons with disabilities, non-governmental organisations, international and human rights bodies, including national human rights institutions and equality bodies, welcome the decisions taken by the Committee of Ministers of the Council of Europe that suspend the adoption of the draft additional protocol to the Oviedo Convention, provides new instructions to the Steering Committee for Human Rights in the fields of Biomedicine and Health and foresees the participation of organisations of persons with disabilities and other relevant stakeholders in the further discussions to come.

For years, we have been advocating in many fora for the withdrawal of the draft Additional Protocol as it contravenes the United Nations Convention on the Rights of Persons with Disabilities (UN CRPD), including through the campaign #WithdrawOviedo led by the European Disability Forum (EDF) and Mental Health Europe (MHE). While the recent decisions do not meet our full expectations, they could provide the basis for greater efforts to align Council of Europe standards concerning persons with disabilities to ensure no contradiction with the UN CRPD.

The Decisions adopted on May 11th freeze any adoption of the draft Additional Protocol to the Oviedo Convention until the end of 2024. The Committee of Ministers also decided to:
• Instruct the Steering Committee for Human Rights in the fields of Biomedicine and Health (CDBIO, formerly known as DHBIO) to complete by 31 December 2024 a draft recommendation promoting the use of voluntary measures in mental health care services and a report on the case law of the European Court of Human Rights relevant to mental health;
• Include in the participation to the CDBIO meetings, the United Nations Office of the High Commissioner for Human Rights and as observers to the CDBIO meetings where the draft Additional Protocol is being discussed, Rehabilitation International, the EDF and the European Association of Service Providers for Persons with Disabilities (EASPD);
• Transmit for opinion to the Parliamentary Assembly of the Council of Europe (PACE) the draft additional protocol to the Oviedo Convention, after the examination of the recommendation and report indicated above;
• Prepare a declaration of the Committee of Ministers affirming the commitment of the Council of Europe to improving the protection and the autonomy of persons in mental health care services, once the deliverables listed above are completed.

Although these decisions do not constitute an outright withdrawal of the draft Additional Protocol, they give clear instructions to halt the current process and to work further towards respecting autonomy and the consensual nature of mental healthcare. We further welcome the fact that the Committee of Ministers recognises the importance of involving civil society organisations in the CDBIO meetings related to mental healthcare.

We will continue to closely monitor the work of the CDBIO as well as other bodies of the Council of Europe to ensure that human rights standards are safeguarded across Europe. We will remain attentive and vigilant to the process to come, contributing constructively and trust that the final outcome will include the withdrawal of any proposal that contradicts the UN CRPD. We call on the Council of Europe to work closely with us over the coming period to ensure full alignment with the UN CRPD in all future processes.