Beit Issie Shapiro won the 'Early Intervention' category with their practice 'The Forum of Organisations and Parents for Children with Disabilities', a coalition of over 60 organisations and parents who work together to promote policies and legislation that benefit young children with disabilities. 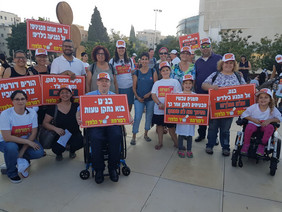 Name of the Practice: The Forum of Organisations and Parents for Children with Disabilities

Description of organisation: Beit Issie Shapiro (BIS) is Israel’s leading non-profit organization furthering the rights, opportunities and services for people with disabilities in all sectors of society, impacting on some half a million people annually. It promotes social change though a three-pronged approach: development and provision of cutting edge services, advocating for better legislation and developing leadership and self-representation, and sharing knowledge throughout Israel, as well as internationally, through research, consultation and training.

Description of practice: The Forum of Organisations and Parents for Children with Disabilities is a coalition of over 60 organisations and parents who work together to promote policies and legislation that benefit young children with disabilities.  The coalition aims to develop fruitful collaboration between the various disability groups working for the benefit of the disability sector, as well as encourage real dialogue between various demographic groups concerned – organizations, parents, people living in the center and in the periphery, Jews, Arabs and more, together with government representatives.

Problem targeted: The population of Israel is 8 million, out of which 250,000 children have a significant disability that affects their day-to-day functioning. The coalition was set up to address the challenges faced, as well as the lack of services and subsidies available to young children with disabilities and their families.

Solution offered: The coalition works to ensure that the UNCRPD is implemented into Israeli legislation regarding children with disabilities. Especially at the arguably most critical age of development. It does this by promoting legislation for all children with disabilities, particularly in the field of early intervention, so that these services are funded by the government and can be accessed by all who need them. An innovative aspect of the practice is that the parents take part in the legislative process by attending parliamentary discussions and working with government officials and legislators.

Impact Generated by Practice: Over the past 19 years, the coalition has promoted 15 laws and regulations that have impacted over half a million people. These regulations have further provided subsidies or services in the amount of over 100 million euros a year. Many of the existing Israeli laws or regulations in the field of early intervention have been promoted by this coalition. Examples include:

Sustainability of Practice: The coalition has established a strong reputation in the eyes of the political establishment, as a holder of knowledge and as a partner. It is involved in fora aimed at designing policies for the benefit of children with disabilities and continues to actively promote social change through further collaboration between people with disabilities and their families, government, private and non-profit sectors. The work of the coalition has been presented at the UN and other international conferences and forums.

In order to further boost social change, Beit Issie Shapiro know the way further is through further collaboration – between people with disabilities and their families, government, private and non-profit sectors. This collaboration can achieve not only immediate practical objectives, but also create extensive and significant social achievements and solidarity to impact all levels of society.

Contact Information: Adv. Valerie Zilka, Promoter of Policy & Coordinator of the Forum of Organisations and Parents for Children with Disabilities: valeriez@beitissie.org.il