In the beginning of March, EASPD was busy with several events in Athens around the topic of early childhood intervention(ECI). 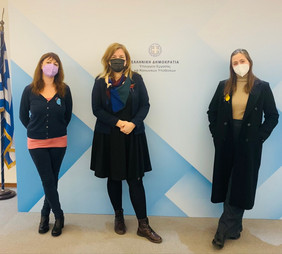 In the beginning of March, EASPD was busy with several events in Athens around the topic of early childhood intervention (ECI).

The first three days happened at the premises of the Greek Ministry of Labour and Social Affairs, which is the main beneficiary of the “Technical Support to implement reforms to support the development of family centred early childhood intervention services in Greece”, otherwise known as the ECI Greece, funded by DG REFORM and implemented by EASPD in cooperation with the European Commission. The project has made significant process in the last months in working towards its ultimate objective: to develop a modern evidence-based legislative and financial framework for ECI services.

The project’s methodology is based on co-production, therefore key Greek and international stakeholders and experts on ECI met for a roundtable to discuss the future project deliverables, and in particular the country report on ECI in Greece, which will provide a state-of-play of ECI within the country. Discussions revolved around clarifying a definition for ECI to be used in Greece and within the future legislative framework to be developed by the end of the project. Stakeholders also discussed the training and pilot programme, and future dissemination and awareness raising activities.

This was followed with a train-the-trainer addressing ECI that will pilot family-centred methodologies for one year and inform thus the legislative process. The training, which lasted 2.5 days, is the first step for a pilot implementation of family-centred methodologies in seven selected service providers. The ultimate objective of the training was to raise awareness and update professionals on evidence-based practices for family-centred Early Childhood Intervention. EASPD was joined by a range of trainers and practitioners, covering both a medical and social perspective towards ECI. The trainings helped to promote capacity building of pilot service providers and helped to provide the necessary tools to transform their services towards a family centred ECI model. The staff trained will now look into implementing the concepts and methodologies provided, train their colleagues, as a first step in the piloting of the project.

Finally, EASPD hosted its first Provider Forum of the year on March 4th, which was co-organised and hosted by the recently established Greek network of service providers, THE NET. The provider forum took place at the premises of Theotokos Foundation and looked to discuss early intervention in Greece through a series of panels with key experts. EASPD Secretary General, Maya Doneva was a panelist within the forum, bringing in her own perspective on the importance (and existing obstacles) of establishing family-centred ECI processes in Greece and the future plans of the ECI Greece Project.

The next steps of the project will focus on the 1-year pilot implementation within the selected service providers. This pilot will be crucial in informing us on key points of discussion in the formation of the action plan and legislative framework. Moreover, EASPD will continue developing the research tools and methodologies to be used in gathering primary research for the Greek country report.